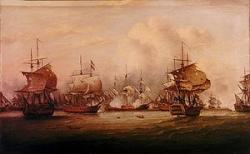 It is a mistake to think of the fighting in the American War of Independence  or Revolution, depending on your standpoint  as limited to America. European rivals to Britain were heavily supportive of the American side, France providing troops and material, the Dutch similarly shipping vital supplies to the colonials. In response to the latters actions the British declared war at the end of 1780 and imposed a naval blockade which because of British naval superiority and Dutch political weakness proved highly effective.
Eventually on August 1 1781 a convoy ventured out of northerly Dutch territory, under the protection of a significant military escort headed by Admiral Johan Zoutman. This fleet of 70-plus merchantmen guarded by seven ships of the line and six smaller vessels was spotted early on August 5 by a British convoy returning from the Baltic, commanded by Admiral Hyde Parker. In terms of fighting vessels the forces were roughly equal, but the British had greater firepower, and after a three-hour battle they drove the Dutch to seek home harbour and safety. British casualties were given as 104 dead, their enemy admitted to 142, but the true figure may have exceeded 1000. Both sides claimed victory, but as the Dutch remained penned in for the foreseeable future their case was weaker.