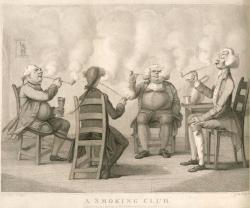 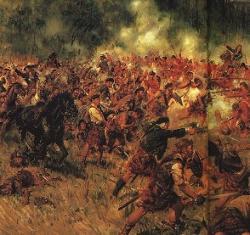 There are many myths and legends surrounding the arrival of tobacco in Britain, including the delightful tale of Walter Raleigh s servant seeing him smoking a pipe for the first time and dousing his master with a bucket of water, believing him to be on fire. It was not Raleigh, from all evidence, who introduced the stuff to England, but more likely Drake , who brought the plant back to Plymouth on August 9 1573, or by some accounts even earlier, returning from a voyage to the Caribbean. Hawkins is another who could well have been the guilty party, as early as 1565. It seems long before the date traditionally given for the noxious weeds arrival, July 27 1586, that it was even cultivated here.
But that last date is still a landmark in our history, as it was when settlers from the Roanoke Colony in Virginia arrived like Drake before them at Plymouth, with a large amount of the stuff, and smoking it publicly in clay pipes. They caused a huge sensation. Strangely tobacco was smoked, or as the Elizabethans at first said, drunk for health reasons  perhaps not so strangely given its narcotic properties, effect on appetite, and power to relax us.
Raleighs part in the new craze was as a populariser  he was probably given a pipe and tobacco by Ralph Lane, the first governor of the new English colony named Virginia in honour of Queen Elizabeth I . The year 1586 then saw courtiers take up the habit as a fashion statement; soon followed by those further down the social ladder, and by the young too  schoolboys at Eton were made to smoke a pipe at breakfast for health reasons.