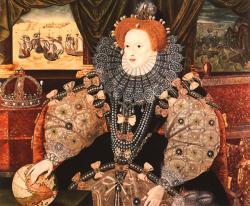 Quotes from Elizabeth I

'A clear and innocent conscienc'... More

Elizabeth I was born on the 7th September 1533 at Greenwich Palace, her father was Henry VIII, and her mother was Anne Boleyn, at the age of just three months she was given her own Palace, Hatfield House, and was cared for by her own household. Henry was disappointed when she was born as he desired a male heir, frustration deepened when her mother did not produce an heir, and Anne Boleyn was executed when Elizabeth was nearly three years old. Her sister Mary was 17 when Elizabeth was born and the rivalry and resentment grew when Mary, at the request of Henry was also moved into Hatfield House.

Elizabeth's half brother was born after Henry married Jane Seymour, after the death of Henry VIII, young Edward VI was placed in the hands of his uncle who was made Lord Protector of England.

Elizabeth became captivated with Thomas Seymour who had married Katherine Parr after Henry had died, Katherine died shortly after childbirth. Thomas proposed to Elizabeth several times but to no avail. Elizabeth's brother King Edward grew seriously ill, and eventually died in 1553. Speculation grew as to who would succeed, many were worried that Mary who was a Catholic would be the one. But Lady Jane Grey, who was a descendant of Henry VIII's sister was proclaimed Queen, which only lasted 9 days and both she and her husband were imprisoned in the Tower of London by Elizabeth and Mary.

Mary was then crowned Queen and married a Spanish prince which increased her unpopularity, and increased calls for Elizabeth to be crowned. Mary had no option but to imprison Elizabeth again in the Tower, but just a few months later she was released back to Hatfield. Mary died on 17th November 1558, and Elizabeth ascended to the Throne.

Elizabeth had inherited a country that had been weakened by war, and possessed empty coffers at the Treasury. Her strong understanding of policies and the need to strengthen England's standing led to her encouragement of Sir Walter Raleigh to embark on his voyage of discovery.

The Spanish amassed many ships and set sail to invade England, the English defeated the Spanish, in what was claimed to be the greatest defeat since Agincourt. In 1596 England once again faced the threat of invasion, the Spanish had captured Calais, the Queen decided to send an expedition to Cadiz to destroy the Armada before it set sail, 120 English and Dutch ships attacked Cadiz. The Spanish Fleet was destroyed and once again Spain was humiliated. The war between Spain and England lasted many years until James I came to the throne.

Elizabeth was a popular Queen and was often called Good Queen Bess, and the Virgin Queen due to her reluctance to marry, and Gloriana - England's National Icon. She died on on the 24th March 1603, her coffin was placed on a Barge and made it's way down the River Thames to Whitehall, James ascended to the throne and ordered a magnificent Ceremonial funeral which took place on 28th April 1603. Elizabeth was the last of the Tudor royals to reign

Contributors: Do you have a site related to Elizabeth I?
Supply some content for this page and we will gladly add a link to your site. Email here.