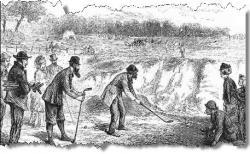 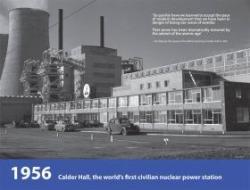 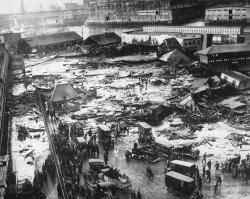 Prestwick, Ayrshire and Arran The 17th of October 1860 AD

In an age when amateurs looked down on professionals as rather grubby creatures, the first supposedly Open Championship was in fact not an open event, being contested by eight professionals on the links course of the Ayrshire town of Prestwick.

The event, known as the General Open Competition, was the brainchild of Major J.O. Fairlie, a local landowner and the secretary of Prestwick Golf Club .

The contestants played three rounds on a single day, though the course was 12-holes rather than the later standard 18. Old Tom Morris was the hot favourite, but he was beaten by two shots by Willie Park of Musselburgh who shot 174 for the 36 holes.

Parks prize was a red Morocco leather belt with a big silver buckle in the style of those awarded to prize-fighters, and there was no monetary reward attached to his victory. The draw for the professionals was that they would be able to caddy for the gentleman amateurs playing in Prestwicks club competition also held that week, rather a far cry from the present era  the 2007 Open Championship had prize money of £4.2 million.

Park took the belt again with his victory in 1863. The first winners cash prize was taken by Old Tom Morris in 1864, pocketing the princely sum of £6 for his efforts. In 1870 after Young Tom Morris had won the belt three times in a row he was given it to keep, and there was no competition held in 1871. But in 1872 the current trophy, the Claret Jug, was introduced, still arguably the most sought-after prize in golf .