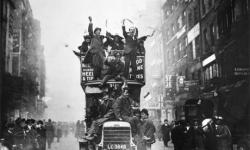 Field Marshal Haig , with his genius for getting things wrong, had stated in October 1918 that the German army showed no signs of being brought low enough to force the German government to sue for peace. Then suddenly the situation changed: the German navy mutinied; uprisings in Berlin and other major cities began. Hindenburg, acting German commander, hastily sought a meeting with his opposite number Marshal Foch, sending a delegation headed by the politician Matthias Erzberger to meet the allied command at Compiegne in Northern France.
At 5am on November 11 agreement was reached; the Germans were so weakened and desperate  Kaiser Wilhelm had already fled to neutral Holland - that all but the most ridiculous demands were met; the German navy was to be surrendered; immediate withdrawal from allied land was to take place; vast quantities of material were to be handed over, along with civilian resources such as railway locomotives; and German land near the Rhine was to be occupied by allied troops. A cease fire would begin at 11am that very day.
The war had claimed some 16 million dead; 2 per cent of the British population had perished  885,000 military deaths and more than 100,000 civilian. And the madness continued to the end, with more than 2,500 casualties on the Western Front in the morning of November 11. With ideas of gaining glory or ground (uselessly given the armistice agreement) the allies continued to attack: Henry Gunther, a US soldier, was shot one minute before 11am, charging a German position that was shortly to be evacuated. As a symbol of the stupidity of the war there can be few better.