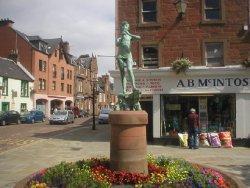 Did you know that David Niven claimed to have been born in Kirriemuir as he thought it sounded more romantic than London ? His spurious claim also extended to his date of birth, though unlike certain actresses he moved it earlier rather than later, to 1909 not as was correct 1910. His actual birthplace was Belgrave Mansions in Grosvenor Gardens, very up-market  one imagines the parties held there being rather different to the riotous ball celebrated as per the song in Kirriemuir.