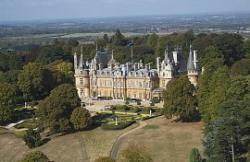 Did you know that the TV series "Midsomer Murders" is shot (stabbed, drowned, poisoned and bludgeoned) in and around Aylesbury? While John Nettles is the ostensible star of the series which has produced more corpses than a biblical plague, the Chilterns and Vale of Aylesbury villages that provide its picturesque locations have won a multitude of admirers of their own around the globe, many fans now making Midsomer Murders pilgrimages: This was where the man ate the death cap mushrooms...