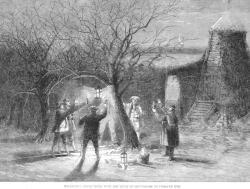 The custom of wassailing is far from unique to Carhampton; indeed it is a tradition that still appears over the Christmas period in counties from all across England: from Somerset through the South West and across the southern coast as far as Kent.
Wassailing can take at least three forms: a simple toast, ideally taken from a communal bowl - wassail is an ancient form of "good health" in Saxon and in Norse. Alternatively there is the walking wassail, a boozy version of carol singing, with the singers toting a large bowl for drink with them. The revellers might have some cheap drink in the bowl to offer householders in return for money, or it might be emptied before the knock on the door, ready for the people visited to refill with whatever alcohol they have available. The potential for truly filthy hangovers is blindingly (careful choice of word) evident.
The third wassail is probably the most ancient of them all, with possible pagan undertones or origins. It is largely a rural version, and the small Somerset town of Carhampton still practices it, though it is the continuation of a revival from the 1930s inspired by a local cider company. Wassailing the tree involves pouring precious liquid such as cider around the roots of an apple tree. The liquid is often heated, and is an offering to the spirits of the orchard and a way of asking for a good harvest. In Carhampton the ceremony takes place on old twelfth night, January 17, but elsewhere it can be on twelfth night proper (January 5), or Plough Monday, or whatever date is traditional to the village or area.
The Carhampton ritual involves circling the biggest tree in an orchard there, this king tree representing all the others, singing a wassail song that expresses hope for the future harvest, and ends in a loud hurrah. Noise is important to the ceremony, supposedly to scare off the evil spirits who might spoil the harvest to come, or alternatively to waken the good spirits of the tree so they can get on with their work of growing healthy apples. At Carhampton they don't rely on the hurrah alone - a shotgun is fired to make sure the celebration does not go unnoticed. Carhampton's wassail has another element, seen in the same or slightly different form in other settlements, with pieces of toast dipped in cider hung on the branches of the tree, another offering - you can't be too careful after all - supposedly for the robins who represent the good spirits of the orchard. Elsewhere the offering can be cheese or cake as well as or instead of toast or bread.
Not many of us are worried about evil spirits these days, and too few of us are aware of harvests. But the wassail is an excellent way of rounding off the Christmas celebrations, and of making us think for a moment about where our food and drink actually comes from. And if such thinking is helped along by a glass or three of cider, all the better. Wassail!