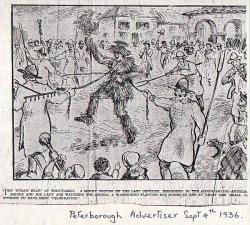 It is said that events similar to Whittlesey s Straw Bear Festival were once quite common all over the country, but they died out as for a time this Cambridgeshire towns did when, according to local legend, an officious policeman in 1909 deemed it to be little more than an excuse for begging. In 1980, however, Whittlesey revived the event, to the great delight of its publicans.
Every Tuesday after Plough Monday (the first Monday after Twelfth Night) it was traditional for a carefully constructed bear costume fashioned from straw to be donned by a hefty ploughman who would be led around the pubs, shops and houses, dancing and extracting gifts for a celebratory meal. These days the bear appears on the Saturday following Plough Monday in a parade of Morris Dancers and folk musicians, venturing around the pubs in keeping with tradition. On the following day the straw bear is burned in the market square amid further celebrations.
When the event was revived in 1980 about 30 merrymakers accompanied the bear. This number has now swelled to some 250 or more, with a decorated plough added to the symbols and what has become a mini-festival of folk dancing, which even in January is thirsty work.
The festival was important for the agricultural community, farmers reserving their best straw for the making of the bear. Though the method of making it has changed, the costume still weighs about 30kg, a considerable burden for the wearer who is also encumbered with a lead or chains to keep him in order.
For some the bear burning is a survival of pagan winter festivals celebrating the end of one year and its bounty and the promise of new life in the coming months, the old straw burnt symbolically. Others see it as a simpler festival of pleasure, part of a meal for farm workers marking their imminent return to labouring after the Christmas festivities. The most intriguing theory  and of course the most bloodthirsty - is that in distant times it was not a straw bear but a criminal or wrongdoer selected for sacrifice who was dragged through the streets and burned alive. Ancient ASBO or ploughmens party, it really doesnt matter today when the festival is more about celebrating English eccentricity. And beer.

From simone on 2nd March 2011
A wondferful day out, we go very year and love it