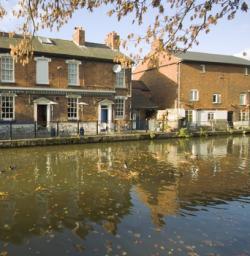 Few if any English writers match the closeness with which Arnold Bennett is associated with one particular place, in his case the Staffordshire city of Stoke-on-Trent and its environs.
Bennett was born on May 27 1867 in Hanley, one of the six towns that comprise Stoke-on-Trent. His novels, however, were based in The Five Towns: Hanley, Burslem, Longton, Stoke, and Tunstall, which in his novels feature respectively as Hanbridge, Bursley, Longshaw, Knype and Turnhill. He cited euphony as the reason for the five towns, in one detailed letter to businessmen in the missing town, Fenton, explaining how five sounds so much better than six, but this has not stopped other theories on the omission surfacing.
The Bennett family moved gradually from near poverty to middle class comfort during his childhood and youth, his father Enoch qualifying as a solicitor in 1876, and though a late starter going on to establish a successful practice. The future novelist was born above a pawnbroker's shop on the corner of Hope Street and Hanover Street in Hanley/Hanbridge (though there have been many changes the spot is marked with a plaque now); by 1880 the Bennetts had progressed to a rather grand house built to his father's specifications on a plot in Cobridge that had set him back £200, the house itself costing a further £900.
This six-bedroomed three-storey villa, 205 Waterloo Road, is the epitome of Victorian solidity, red-brick and terracotta with bay windows thrusting out like the chest of a confident advocate. In between Hope Street and 205 Waterloo Road they lived for short periods at Dain Street in Burslem, Newport Lane, and before the construction of the villa at 205 they spent four years nearby at 198 Waterloo Road.
Bennett's view of his upbringing there can be gathered from his turning Cobridge into Bleakridge in his writings, and when he had a little life-experience behind him he escaped the claustrophobically Victorian patriarchy of Waterloo Road for the opportunities and gaiety of London and later Paris.
Not unnaturally Stoke is proud of its famous son, and the local tourist office has information aplenty on him, including the leaflet Bennett's Bursley Trail.
Sadly and happily too Stoke has changed a great deal from the time when it provided Bennett with the settings for his Five Towns series, Anna of the Five Towns, the Clayhanger novels, The Card, A Man from the North, and the rest. Sadly in that the potteries and the steelworks of his era have gone or are gradually going; happily in that the air is cleaner, and the people generally much better off. There are still, however, many tourist sites based on the pottery manufacturing history of the area, with its Wedgewood links, and some wonderful factory shops and working displays to be found in the city
And the people of Stoke deserve a mention: they have the warmth and humour of Liverpudlians without the edge: don't be surprised to be addressed a 'me duck', nothing to do with waddling aquatic birds, the term has the same respectful root as duke. Don't miss trying a Staffordshire Oatcake when you visit.
The setting in his novels is a character in its own right, the smoky background of a working environment, the rows of little houses in what he called Indian-red brick, the pot-kilns and industrial ovens. Though he was happy to have escaped the life of a junior clerk in his father's practice for work in journalism in London , he retained an affection bordering on love for the place that comes through in his works: "Beauty was achieved and none saw it," as he writes in Clayhanger.
For lovers of his works there is much pleasure to be had in a trip around the area identifying the places from his life: his education in Newcastle-under-Lyme (Oldcastle rather perversely in his works) and then Burslem; the ornamental garden with Wedgewood Plaque dedicated to his memory; the cemetery in Burslem where his ashes are buried.
But there is much more detective fun in tracking down the real places disguised (often thinly) in his works. Here are a few to start you off: Duck Inn/Square/Bank are Swan Inn/Square/Bank in Burslem; the Dragon Hotel is in reality the George Hotel on Nile Street and Waterloo Road; Toft End is really Sneyd Green outside Burslem; and the Waterloo Road of his youth is Trafalgar Road in his books.
In his time Bennett was feted as the successor to Dickens , a realist writer who cared for the masses, though the reputation of his work suffered in his later years and after his death at the hands of often upper-class critics who despised his self-confessed focus on earning money from his writing (do we dislike Dickens because he wrote so much at speed to keep the bailiffs from the door?). But the readability of his novels (a quick exercise in reading a few pages of Bennett against say Virginia Woolf , one of his strongest critics, is pretty conclusive) and renewed critical praise for them has brought a return of interest in his considerable output, and by extension in the origin and setting for so much of it.