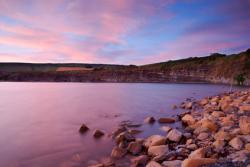 Hunting for Dinosuars on the Jurassic Coast

The Jurassic Coast is a World Heritage Site situated in the south western counties of Dorset and Devon in England. It is world famous for its proliferation of fossils, some of the finds there are among the most important in the history of dinosaur archaeology. Today, the stretch of coastline that runs for a total of 95 miles (153 kilometres) from Orcombe Point near Exmouth in East Devon to Old Harry Rocks near Swanage in East Dorset, is a major attraction for dinosaur hunters worldwide. The Jurassic Coast was designated a World Heritage Site in 2001, only the second natural site in the British Isles receive this charter.

Visitors to the Jurassic Coast have the facility to walk its entire length using the South West Coast Path . Waymarked as a long-distance footpath and a National Trail, the South West Coast Path stretches for 630 miles from Minehead in Somerset all the way to Poole Harbour in Dorset via the coastline of Devon and Cornwall . Towns like West Bay act as a gateway to the Jurassic Coast. A Jurassic Pier was opened in West Bay in 2004. The port of Weymouth is ideally situated near the centre of the world heritage site and a World Heritage Coast Centre for the town is due to be opened in 2011. Abbotsbury, Bridport , Budleigh Salterton , Charmouth , Exmouth, Lulworth , Lyme Regis , Seaton , Sidmouth and Swanage are the other gateway towns.

Taking to the coastal path or driving or bussing onto the gateway towns isnt the only way to enjoy the spectacular Jurassic Coast. The area is a historic maritime region so going by boat is a traditional alternative way of getting around. Boat charters and guided boat tours are abundant along the Jurassic Coast. You could even sail the Jurassic Coast in a luxury yacht such as the Songbird of Weymouth , a luxury catamaran available for charter or even as a party location.

Towns like Charmouth have shops and businesses that have embraced the heritage of the Jurassic coast, not only in name but also in the products they stock. Many fossil shops have been established in the area, such as Charmouth Fossils on Lower Sea Lane. Owner Tony Gill started fossil hunting 25 years ago and the shop features a large collection of local fossils, many of them for sale. Tony has even discovered a 180-million-year-old almost complete fossil of an ichthyosaurus on the Jurassic Coast, a very exciting find indeed. The shop even stocks fossiling hammers that are available to hire for the would-be dinosaur hunter.

Another fossil dealer on the Jurassic Coast is Brandon Lennon from Lyme Regis. Brandon sells his fossils on the internet but he also runs fossil workshops and organises popular fossil walks starting at the end of Marine Parade at Lyme Regis. Such walks can prove very useful to the new and experienced fossil hunter alike. Hunters like Brandon have plenty of local knowledge, as well as practical experience and techniques, to pass on. Another popular and well established fossil shop based in Lyme Regis is Mikes Minerals and Fossils found on Drakes Way.

There is an abundance of information regarding the World Heritage Site available on the internet. The Jurassic Coast even has its own official website! The Jurassic Coast Trust runs a scheme to accredit local businesses in the Jurassic Coast Quality Business scheme. The scheme aims to give visitors confidence in accredited businesses that have demonstrated compliance to a number of standards for everything from health and safety to standards of customer service.

The Jurassic Coast is packed with all manner of accommodation for the fossil hunting visitor. Hotels such as the Soar Mill Cove Hotel in Salcombe offer a perfect base to explore the coast. Soar Mill Cove is also just 15 miles from the main road system (A38) and yet faces its own tranquil sandy bay. The Bedford Hotel in Sidmouth is an ideal seaside hotel, complete with comfortable lounges to relax in after a day on the beach searching for abundant evidence of the areas prehistoric past. Hotel Riviera , also in Sidmouth, is a traditional style English seaside resort luxury hotel, rated 4 stars by the AA. Keystone Lodge Hotel at Bulstone is an example of a fine small country hotel set in picturesque surroundings that are so typical of this part of England.

One final tip before you head of on a memorable visit the wonderful Jurassic Coast: Make sure you leave space in your luggage for your finds!