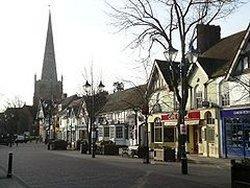 To the south west of Birmingham on the A41 and with easy access to the M42 is the town of Solihull. To car enthusiasts who appreciate the benefits that a Land Rover can bring then this is the spiritual home of the Land Rover for it was here during the Second World War that the Rover Car Company established its factory. Solihull has long been associated with engineering excellence but this wasnt until the early 19th century. Certainly there was a type of engineering undertaken here prior to that time but it was mainly an agricultural economy and the only engineering undertaken was the manufacture of agricultural implements and hunting weapons. By the 18th century Solihull boasted its own County Court and grammar school and was still heavily involved in the agricultural trade, Birmingham had been growing at a phenomenal rate and the wealthy were now building their grand houses here in Solihull. The opening of the Birmingham to Oxford Railway saw Solihull evolve from an agricultural centre to an engineering centre and the population during the early part of the 20th century grew at a tremendous rate. Today Solihull benefits from excellent road, rail and air links, its new shopping centre known as Touchwood which is home to a number of national stores and yet within easy travelling distance is the open countryside of the Heart of England.