"Arriving at the Chester by train and the first th...more

B and Bs in Chester 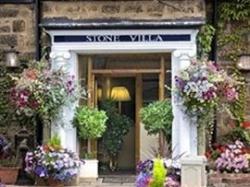 At Stone Villa, every effort has been made to make your stay most comfortable. Built in 1850 is situated at the end of quiet cul-de-sac off the A56 into Chester making it easy to find us and our AA 5 Star rating says everything about your stay. All 10 rooms have been refurbished, providing both bath and shower in every ensuite bathroom. We offer 3 ground floor rooms with wheelchair access. Parking is in our private, floodlit car park to the front of the Guest House. After a relaxing stay with all the facilities and comforts you expect in a 5 Star Guest House you can experience Stone Villa's breakfast, second to none served in our large breakfast room. We are just a minute's walk to shops, banks, post office, cafes, restaurants and bars in the popular Hoole area of Chester and 10 minutes walk to the centre of Historic Chester and the Railway Station. The city is packed out with things to do and see with such impressive sights as the Cathedral, the Rows - two-tier shopping galleries which date from the Middle Ages, the Roman Walls and Amphitheatre and the second most photographed clock in Britain after Big Ben - The Eastgate Clock. A walk through the Grosvenor Park will take you to the River Dee offering relaxing views and boat trips. Each year Chester hosts the oldest running Horse Race in England, Chester Races, on the Roodee with the first recorded race held on February 9, 1539 with the consent of the Lord Mayor Henry Gee, whose name led to the use of the term "gee-gee" for horses. You don't need to travel far from the city centre to find other main attractions such as Chester Zoo, Blue Planet Aquarium and Cheshire Oaks Designer Outlet Village. Further afield we are situated at the hub of the North West to visit Tatton Park, North Wales with its Castles and Snowdonia National Park, Liverpools Albert Dock museums, Beatles attractions and City attractions and Wirral Penni