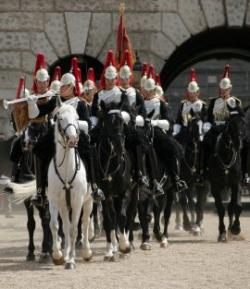 Watch real troopers working with their horses in the original 18th century stables (via a glazed screen) and hear accounts of their demanding training. At different times of the day there will always be something to see  whether its the horses being fed and watered or having their hooves oiled and checked. Children can have fun in the dressing up area trying on helmets, combat jackets and other military uniforms. There are also kids trails, activity packs and touch-screen quizzes to keep everyone amused. Over the summer holiday the Museum is running a series of story-telling sessions and children's craft activities - call 020 7930 3070 or visit our website for more details

The Museum also has an outstanding collection of treasures from ceremonial uniforms, Royal Standards and gallantry awards to musical instruments, horse furniture and jewelled boxes by Fabergé. These have been amassed over the centuries and many are on display to the public for the very first time.

Amongst the treasures are two silver kettledrums given to the Regiment by William IV and the cork leg which belonged to the first Marquess of Anglesey, who lost his real one at Waterloo. Modern additions include Jacky Charltons football cap  he did his national service with the Regiment  and Seftons bridle  the horse that was injured in the 1982 Hyde Park bombings.

The Household Cavalry Museum sits within Horse Guards in Whitehall and is one of the citys most historic buildings. Dating from 1750 it is still the headquarters of the Household Division in which The Household Cavalry plays a central role and has performed the Queens Life Guard in a daily ceremony that has remained broadly unchanged for over 350 years.