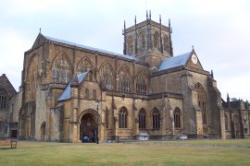 In the year 705 St Aldhelm, Abbot of Malmesbury and newly consecrated as first Bishop of the West Saxons, chose Sherborne as the site of his new cathedral. The church he built served 26 succeeding Saxon bishops, but soon after the Norman Conquest the See was moved to Old Sarum and later to Salisbury.

Since 998 Sherborne had been home to a flourishing community of Benedictine monks and the former cathedral now became their Abbey Church. It was the monks who carried out a major rebuilding in the 15th century and gave the Abbey one of its chief glories, the earliest great fan-vaulted roof in Europe.

The most recent notable addition is the new Great West Window by John Hayward, dedicated in 1998 in the presence of Her Majesty the Queen and His Royal Highness the Duke of edinburgh.

This year we are celebrating the 13th centenary of our foundation. It is a year of special events not only in the Abbey but throughout the town. Visit our website for details.