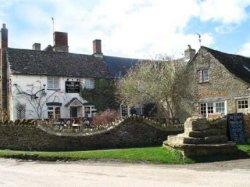 The Plough Inn in Kelmscott at the end of the 17th century. It was originally a watering hole for famous artist William Morris and through the years encumbranced a village shop and bakery, with bread ovens still visible inside today. Mr Martin Platt took ownership of the Plough in 2000 and after refurbishment , the Plough opened its doors in 2002. After building great momentum the pub was tragically hit in July 2007 by the severe flooding affecting the British Isles and had to close due to water damage. This gave Martin the insight to strengthen the foundations and the decision was made to try and make the pub eco friendly.Paul the head chef was already commited to local suppliers and with that ethos in mind, all gas was removed and replaced with induction technology as well as hot water being generated from underground heating. The kitchen now uses state of the art Swiss bespoke induction as well as electric grill and ovens. All fridges use hydro electric too.