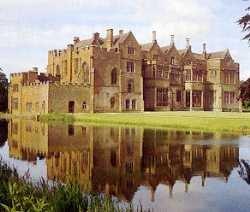 Broughton Castle is a splendid medieval manor house and the family home of Lord and Lady Saye and Sele.

There was already a building on the site when Sir John de Broughton built his manor in 1300. It was set on island surrounded by a three acre moat.

In the late 16th century the house was enlarged into an impressive Tudor home, decorated with splendid plaster ceilings, fine panelling and ornate fireplaces. In the 17th century William Fiennes, 8th Lord Saye and Sele, opposed Charles I's attempt to rule without Parliament and refused to take the Oath of Allegiance. Broughton Castle became a secret meeting place of the King's opponents. However, he disapproved of the King's execution and removed himself from public life. This act earned the 8th Lord a pardon after the Restoration in 1660.

The oldest part of the house is found in the groined passage and dining room. There are also passageways with vaulted ceilings and a staircase leading to the rare 14th century chapel. This has a stone altar, traceried window and heraldic glass. The Great Hall has displays of arms and armour from the Civil War and the Fiennes family tree. The Oak Room has Tudor oak panelling from floor to ceiling and an unusual interior porch. Queen Ann's Room commemorates the visit of James I's wife Queen Ann of Denmark in 1604. The King's Chamber was used by James I and Edward VII and has a splendid stucco overmantel of 1554.

The gatehouse, garden and park are also open to the public. The gardens have mixed herbaceous and shrub borders and the formal walled garden has roses surrounded by box hedging in unusual designs .