B and Bs in Boston 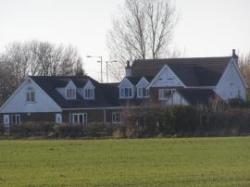 Boston lodge is situated just off the A17 on the A1121 Boston road.We are only 7 miles from Boston and ideally placed for touring the fens. Fishing, golf, cycling, walking, bird watching, it's all available locally. We are within easy driving distance to Linclon, Sleafor, Spalding, Skegness, Kings Lynn and so many other places far too numerous to mention. Boston lodge was once an old farm house and much smaller than today,it was built circa 1900 and different owners have extended the property over the last 30 years or so. We are told that it has been used as a bar and restaurant and also as an entertainment venue which apparently was very busy at one time before being changed to a bed and breakfast establishment. The present owners Patrick and Hazel bought the lodge in August 2008. We are seeing repeat guests which is very nice even from France,Belgium and the USA. Lincolnshire is known as bomber county because of the number of air-bases,air-fields and strips that abound throught the county. Guy Gibson was stationed nearby during the 2nd world war and used to frequent the Bluebell inn at Tattershall thorpe built in 1257, here you will find lots of old airforce photos and autographs of the old pilots some written on the ceiling.