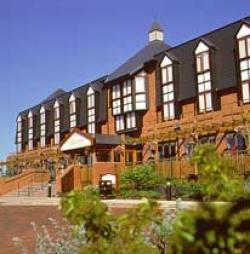 Add your review
We decided to go away very last minute as a family so my wife and i took our 2 sons one aged 5 and the other 18 months to the Village in Nottingham, we had looked at centre parks and these other more exclusive packages but they could not fit us in midweek and the facilities at the Village are nothing like Centre Parks we were pleased that the swimming and fitness facilities were included in the price and it was far less expensive than centre parks. The hotel isn't in the best of location's as many of these types of hotels aren't it is located on a small retail park that includes a McDonalds and some outlet shops opposite although none of these are on the doorstep they were a 2 min walk from the main entrance. We were a little disappointed with the rooms, We were unable to get a room that could facilitate us all as a family without being cramped which we didn't realize when we booked the hotel, so we were having to climb over the travel cot for our toddler to get out the door and there was little room for the kids to move about, i think this would have been a big advantage if they had just a handful of rooms that had a separate side rooms for children to sleep in. As you would expect our room was about a 4 minute walk down corridors before we got to our room. However, apart from the disappointing size of the rooms for family's the rooms were clean and had a TV with satellite plus there was complementary internet access which was handy as i had taken my laptop with me. The facilities were good, the Cafe' located in the basement along with the swimming pool and jim facilities were good and we got our money's worth from using them, the cost of food and drink were very reasonable and surprisingly in expensive compare to other hotels, although the menu's could have done with a bit more variety so we went elsewhere on more than one occasion to eat. At the time we arrived the place was starting to look a little dated, not tatty but was showing some age. I'm not sure if this was about to be undertaken or not but some of the general information seemed to indicate this was the case. All in all it was average, we made do and for the cost it wasn't bad value. If you have a family I wouldn't recommend this unless they have re looked at the layout by the time you consider it. Staff were a little dizzy and not as polite as i would have liked and this is something that gets up my nose, I expect someone to be over helpful when i arrive and to know what they are doing but i never felt I got this... harsh i know but it was very noticeable to me, i get this at other hotels and B+B's when i spend less money so why not here i don't know. A few more smiles and helpfulness would have been good...... Now we stayed here for 5 days and got a good idea about the place so this wasn't a flying visit, staff were clearly not happy and not making eye contact and looked miserable most of the time apart from one or two people who tended to be in the bar area next to reception. Cost wise this was only £400. for us to stay so it was good value but i would have gone elsewhere if i had known what the hotel was like, it's unlikely that we would go back but as a flying visit if you would make use of the facilities there it's worth a look. I hope this has been helpful, I've tried to be as balanced as i can. Marks out of 10? probably 4-5 James Oliver. Horwich, Lancashire.

Add your review
Good Points: cleaniness of hotel itself and facilities it has to offer Bad Points: the pillows and not deep enough bath