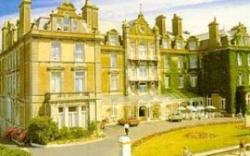 Add your review
Bad Points: Ordered a terrible taxi service when they had cards for a premium one. Beds were terribly uncomfortable and the hot water system kept you awake all night long General review: Would only stay if there was a huge reduction in price

Review by Williams/Northfield on 7th July, 2007

Add your review
Very nice hotel, excellent breakfasts but really disgusted by the noise from Berties which the reception staff confirmed belongs to the hotel. The noise was ridiculous and no attempt whatsoever by anyone from the management to quieten the stupid rowdy behaviour as people from the club waited for the limos supplied by the hotel. I was woken, and I am a very heavy sleeper, at 3.15am on both tuesday & wednesday night by people shouting above motor bikes being reved over and over. My friend was already awake!This went on until around 4am. When we asked at the desk it was confirmed that the club is part of the hotel and when we said that it was not doing the hotel any favours to allow that stupid inconsiderate behaviour all that the girls said was that they knew and a man just said it wasn't open that night (Thursday)as if that made the previous two nights acceptable. We were not alone in our views on this matter and despite the hotel being very nice we would NEVER return as other people also said. I assure you this is not just a little disturbance it is HELL and if you still want to use the hotel for your own sake ask for a room at the back you may then not hear it as badly. I have never had cause to complain in a short break hotel before but this was well beyond a joke.

Add your review
I went with my wife and my 3 children to thehotel Victoria for 3 days to relax , enjoy myself and have fun with the kids and all of this is exactly what i got. Me and my family stopped in the family size room, which was a gigantic room with a double bed , 2 single beds and they even put an extra fold-up bed in there for my youngest child,and the bathroom was fantastic too. You have a door leading onto a massive balcony, and when you walk up to the edge of the balcony you have a specatular veiw of Newquay beach. The atmosphere in the hotel was great,the staff were so friendly and helpful and everyday a cleaner would come into our room and change the bed linen and top up on the supply of tea and coffee. The swimming pool,jacizzi,sauna and the gym was great aswell, everything in there was so clean and fresh, and the jacuzzi...what better then to sit in a bubbly jacuzzi with a view of the sea and beach right infront of you. I don't know how anybody could say that the Hotel Victoria was bad and unhelpful, but we all have our opions,but i would definetly recommend to anybody to stop at the Hotel Victoria, it was excellent.