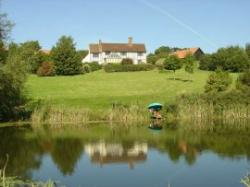 Add your review
This was our second stay at Gladwin's farm. The first was four star in every way, but the management has changed and unfortunately so has the standard. The accommodation is still 4 star, but there are gaping holes in the way the business is run. In fact, there are signs in each of the individual dwellings that state the office hours: a grand total of twelve hours per week. That is simply not enough to meet the requirement of guests in any kind of holiday accommodation let alone one of this size that boasts a four star rating. When we arrived, there was no one available to guide us to our accommodation, only a sign which let us know that the keys were left in the doors of the guests dwellings. Without a map, this meant walking in circles through mud trying to find the right door. Fortunately or otherwise, one of the owners turned up. I didn't know that she was the owner because she never introduced herself, welcomed us, or offered any assistance so I continued searching until eventually I was asked « Do you know where you are? Do you know where you're going? ». At that point it seemed as if the highest priority was to let me know that I had to move my car, a task that was made ten times harder because she'd parked directly behind me, blocking any possibility of turning around, even though there was plenty of space to park elsewhere, at least temporarily, while we unloaded. There were major works going on throughout our stay which we were never warned about, and we were certainly not offered any kind of discount because of it. In fact I was pressured, not asked, to allow workmen access to our dwelling so they could carry out work regardless of the impact to us and our stay. There was no apology for this, nor was there any apology for the noise of the works which were going on in the adjacent building let alone elsewhere on the property. We were led to believe that there was plenty of space for walking, but all the large machinery had churned up the earth so much that most of the space was impassable. Again, we were not warned nor offered any kind of discount, and there was no apology. All in all, we were made to feel that we were an inconvenience, hard work which had to be endured, rather than welcome guests at a quality establishment. There is a huge disparity between the price you have to pay and the standard of management/service received. We won't be staying at Gladwins again and would warn anyone else against the same. It's a shame the high standards experienced during our first visit have slid so far the second time around.