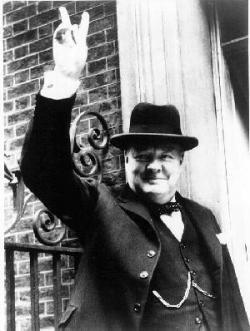 'A fanatic is one who can't change his mind and won't change the subject.'

'A lie gets halfway around the world before the truth has a chance to get its pants on.'

'All the great things are simple, and many can be expressed in a single word: freedom, justice, honor, duty, mercy, hope.'

'Although prepared for martyrdom, I preferred that it be postponed.'

'An appeaser is one who feeds a crocodile, hoping it will eat him last.'

'Attitude is a little thing that makes a big difference.'

'Broadly speaking, the short words are the best, and the old words best of all.'

'Courage is rightly esteemed the first of human qualities... because it is the quality which guarantees all others.'

'Eating words has never given me indigestion.'

'Ending a sentence with a preposition is something up with which I will not put.'

'Everyone has his day and some days last longer than others.'

'He has all of the virtues I dislike and none of the vices I admire.'

'History is written by the victors.'

'History will be kind to me for I intend to write it.'

'I am easily satisfied with the very best.'

'I am prepared to meet my Maker. Whether my Maker is prepared for the great ordeal of meeting me is another matter.'

'I have nothing to offer but blood, toil, tears and sweat.'

'I have taken more out of alcohol than alcohol has taken out of me.'

'I may be drunk, Miss, but in the morning I will be sober and you will still be ugly.'

'If Hitler invaded hell I would make at least a favorable reference to the devil in the House of Commons.'

'If we open a quarrel between past and present, we shall find that we have lost the future'

'In wartime, truth is so precious that she should always be attended by a bodyguard of lies.'

'It is a mistake to look too far ahead. Only one link of the chain of destiny can be handled at a time'

'Never hold discussions with the monkey when the organ grinder is in the room.'

'Never in the field of human conflict was so much owed by so many to so few.'

'Nothing in life is so exhilarating as to be shot at without result.'

'Politics is the ability to foretell what is going to happen tomorrow, next week, next month and next year. And to have the ability afterwards to explain why it didn't happen.'

'Russia is a riddle wrapped in a mystery inside an enigma.'

'Success consists of going from failure to failure without loss of enthusiasm.'

'Sure I am of this, that you have only to endure to conquer.'

'The best argument against democracy is a five-minute conversation with the average voter.'

'The price of greatness is responsibility.'

'There are a terrible lot of lies going about the world, and the worst of it is that half of them are true.'

'This report, by its very length, defends itself against the risk of being read.'

'We are stripped bare by the curse of plenty.'

'We have always found the Irish a bit odd. They refuse to be English.'

'We shape our buildings; thereafter they shape us.'

'You can always count on Americans to do the right thing - after they've tried everything else.'

'In the end Americans always end up doing the right thing, after they have eliminated all the other possibilities'

'Actually american football is a lot like rugby but why do they keep on having all those committee meetings?'

'If you are going through hell keep going'

'There but for the grace of God goes God'