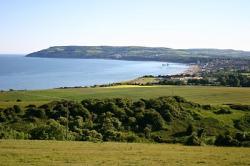 Culver Down is a chalk down found to the north of Sandown on the Isle of Wight, which itself is separated from the southern coast of England by the Solent . Culver Down possesses wildlife typical to the chalk downland in the areas left untouched by cultivation. Rare plants found there include the small scabious, harebell, cowslip, horseshoe vetch, yellow-wort and ladys bedstraw. Breeding peregrine falcons have also been spotted there as have some rare and uncommon species of insect. Along with Bembridge Down, Culver Down forms a Sight of Special Scientific Interest (SSSI). The cliffs are home to various species of birds and give spectacular views over the English Channel.

Other Isle of Wight Naturals

The Needles
The Solent
Alum Bay