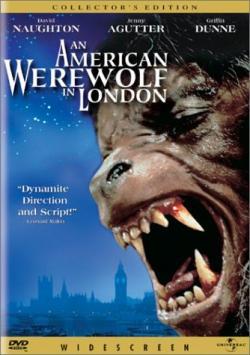 An American Werewolf in London

Year: 1981
Director: John Landis
Cast: David Naughton, Jenny Agutter , Griffin Dunne, John Woodvine.
Set Locations:
An American Werewolf in London is arguably the cult classic comedy horror film of all time. Originally written by director John Landis in 1969, it was not made until many years later and was eventually released in 1981. In the meantime Landis had made several other successful cult classics, including Animal House and Kentucky Fried Movie. This helped him to attract the sort of backing that was needed for the ground-breaking special effects seen in An American Werewolf in London.

The film won widespread acclaim, not least for the special effects and prosthetics which caused the creation of a new Oscar for 'Outstanding Achievement in Make Up'. The new Oscar was introduced especially in order to award it to Rick Baker for his work on the film. Michael Jackson was so impressed by the film that later he hired John Landis to direct his music videos for the 'Thriller' and 'Black and White' albums.

The film tells the story of Jack and David, two American backpackers visiting Britain, who get a fairly frosty reception from the locals in 'The Slaughtered Lamb'. They soon discover the reason for them not enjoying the warm welcome normally associated with the British country folk when they find that the village harbours a dark secret! Whilst walking on the moors later that night, the lads are attacked by a Werewolf. Jack is killed, but David survives and is taken to a hospital in London where he befriends the nurse, played by Jenny Agutter of 'The Railway Children'. David is visited by Jack ghastly apparition and is given the stark news that he is now a werewolf. He refuses to believe this until he wakes up naked at London Zoo after a night of werewolf attacks.

The locations used in An American Werewolf In London make an interesting pilgrimage for fans of the film. The moors scenes are filmed at Hay Bluff, a mountain close to Hay-on-Wye in Powys, Wales. This mountain straddles the Welsh Border and Brecon Beacons National Park. The National Park was established in 1957 and has been a popular destination for tourists and backpackers ever since. You will be relieved to know that there have not been any werewolves sighted there recently and that the locals are actually very friendly! The pub exterior from the film is actually a private house in the tiny village of Crickadarn in Powys, whilst the interior scenes were shot at a pub in Effingham, Surrey.

Such a pilgrimage of the film's locations will certainly give you a chance to see some different sides of Britain. You'll also need to visit the City of London to take in locations such as Tottenham Court Road tube, the scene of the tube station attack late in the film. Whilst there you could do some shopping in London's famous West End, perhaps before moving on to sites of nearby Regents Park and London Zoo. All were locations featured in the film.

Places to stay nearby:
For great accommodation nearby visit our London page or our Brecon page