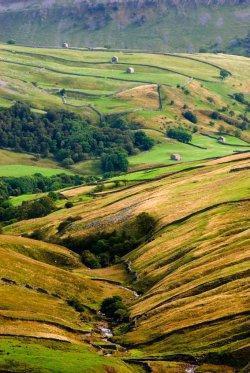 All Creatures Great and Small

Year: 1974
Director: Claude Whatham
Cast: Anthony Hopkins , Simon Ward, Lisa Harrow, Freddie Jones , Brian Stirner, T.P. McKenna, Brenda Bruce, John Collin.
Set Locations:
Northern England: Filmed on location in Wensleydale, North Yorkshire
The film 'All Creatures Great and Small' is based on the books 'If Only They Could Talk' and 'It Shouldn't Happen to a Vet'. Originally released as two separate books, they were combined into a single volume entitled 'All Creatures Great and Small' for the US market. It was in America that the books really took off.

The story is based on the lives of veterinarian James Herriot and his eccentric employer Siegfried. Set amongst the breathtakingly beautifully and wild countryside of the Dales and Moors of Yorkshire, the tales are based on a rural veterinary practice just prior to World War II.

The film tells a unique story of life in the Yorkshire countryside at a transitional time in the history of Britain, with war looming and the face of agriculture in Britain changing fast. The story explores the humorous life of the young apprentice vet and his relationship with the hypocritical Siegfried, together with his hesitant courtship of the daughter of a local farmer.

Simon Ward stars as Herriot and Brian Stirner as Tristan but it is Anthony Hopkins who steals the show with his portrayal of Siegfried. The original books were written by James Herriot , which is the pen name of veterinarian James Alfred Wright (known as Alf Wright). The stories are based mainly on the experiences drawn from his own life.

Alf was born in Sunderland but his parents soon moved to Glasgow, where he grew up. He qualified as a vet at Glasgow Veterinary College in 1939, just at the outbreak of World War II. After a short time working at a veterinary practice in Sunderland, he took up a job in a rural practice based on the town of Thirsk in Yorkshire. It is from this period of his life that the tales are based. The house in Thirsk where the practice was based is now a museum.

Shortly after the film was released, the BBC started work on a Television serialisation of the stories. This hugely popular series starred Cristopher Timothy as James, Robert Hardy as Siegfried and Peter Davison as Tristan, a role which made Davison's career.

The series was set in the village of Askrigg, doubling for the fictional village of Darrowby, with some scenes shot at Bolton Castle. The set used for the indoor scenes is now located at the Richmondshire Museum , in Richmond, North Yorkshire.