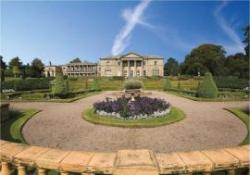 Knutsford is a thriving and extensive town that has managed to keep many of its older buildings and thus its character, a place with great amenities including a large restaurant provision, indicative of prosperity... Read More

Hotels in Knutsford - 10 places to stay

The Golden Pheasant is set in the beautiful Cheshire countryside. An ideal base for exploring Cheshire and Manchester, we are situated opposite Plumley Railway Station. The trains run to Chester and Manchester every hour. A traditional ... More | Double Room: £55 (weekend) - £65 (weekday)
map book

traditional country inn in rural cheshire,but handily placed from the M6 motorway at junctions 18 and 19. six luxury appionted en-suite rooms, all with bath and shower facilities. home made ... More

Mere Court, originally built as a private residence in 1903, now lovingly restored into a fine Country House Hotel. Standing in 7 acres of gardens with an ornamental lake, in the most ... More | Double Room: From £95 - £170