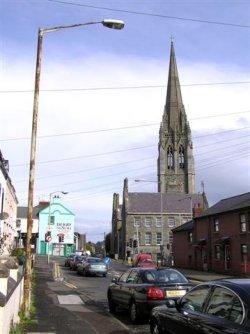 Derry proudly proclaims its uniqueness as Britains only wholly walled city, that character continued in intriguing spots like Shipquay Street. The city is on the estuary of the Foyle, with the huge and sheltered Lough Foyle beyond which will draw yachties... Read More

Hotels in Derry - 22 places to stay

This 4-star 18th century country house hotel is situated in the countryside, just a short drive from Derry city centre and within reach of the City of Derry Airport. Beech Hill Hotel is situated just outside ... More | visit website

This stylish, award-winning 4-star establishment is the only hotel located within the historic city walls, occupying a unique central location just off the Diamond. Open since May 2002, it has won a ... More

Built 7 years ago, this family run inn welcomes many return guests and has gained a positive reputation for its friendly, efficient service and accommodation standards. The Iona is situated on the ... More

On the banks of the River Foyle, a 5-minute drive from the city centre, the modern 4-star Everglades Hotel has free on-site parking, a bar and an award-winning restaurant. Hastings Everglades is ... More

Opening in July 2009, the Waterfoot Hotel is the newest and most stylish hotel in the beautiful historic city of Londonderry, Northern Ireland. It's idyllic location on the east bank ... More

Derry, one of Europes most picturesque walled cities is home to the contemporary styled waterfront City Hotel Derry  for hotels in Derry look no further! This 4 star Derry ... More

Ramada Da Vinci's Hotel is conveniently situated less than a mile from Derry city centre and close to all major routes in and out of the city. With comfortable accommodation in ... More

Map of all our Hotels in Derry