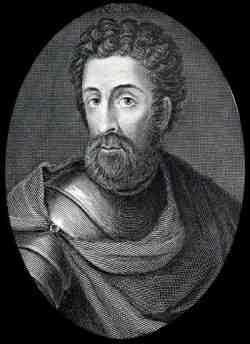 Hymns and poems written in Scotland worship him as the great independence fighter, while contemporary English writers saw him as a murderer, slaughtering the innocent in his blood rush. Who and what was Wallace? And did he really look like Mel Gibson, sexy superman in a kilt?
Born in Elderslie around 1272, his name is derived from the word Waleis which means the Welshman, one of lifes ironies given his place in Scottish history fighting the brutal occupation and governance of King Edward I.
Not much is known about his life before in 1297 he slew William Heselrig, the English Sheriff of Lanark. With this started the Scottish revolution, fighting back after years of oppression by the English, quickly bringing the great victory over them at Sterling Bridge. From being an outlaw Wallace was knighted and made Guardian of the Army of Scotland holding power over Scottish noblemen and even political decisions in the country.
After enduring an enforced period of exile in France he returned to Scotland but was arrested and handed to the English. He died, it is believed, as the Hollywood epic pictured: disembowelled and slowly tortured to death on August 23 1305 at Smithfield Elms in London. His remains were sent to Newcastle, Perth, Berwick and Aberdeen by King Edward I and gibbeted as a reminder for all to see the fate of supposed traitors. Whether or not William Wallace was as fearless as Mr Gibsons film version, whose last word is a passionate scream for freedom, we will never know, but Wallace was later quoted as having said This is the truth I tell you, of all things freedoms most fine. Never submit to live, my son, in the bonds of slavery entwined.

From Nina on 7th May 2009
Champion of Scotlands independence. Defeated Edward 1s army at Stirling Bridge. Edward later successfully invaded Scotland in 1298. Wallace escaped to France but returned in 1303, arrested in 1305. Taken to London where he was hanged, drawn and quartered.

Contributors: Do you have a site related to William Wallace?
Supply some content for this page and we will gladly add a link to your site. Email here.