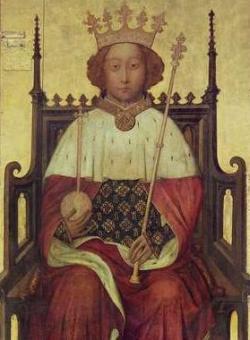 Richard II was born in St Andrew's Abbey in Bordeaux, France on 6th January 1367, his father was Edward The Black Prince, and his mother was Joan Of Kent. Richard's father died in 1376, followed just a year later by his grandfather Edward III. As his elder brother Edward had died in Angouleme in France, Richard succeeded Edward III at the tender age of ten, his Coronation occurred in July 1377 at Westminster Abbey. Due to his age, a council was appointed by Parliament to rule, although he, like many before him had his favourites. Early on in his reign as King Of England an angry uprising occurred at the Peasants Revolt in 1381, Richard although in his teens rode out to meet the gathering in Smithfield in London, and was somewhat successful in calming them. He had been well educated and loved the Arts, and became a patron of Chaucer. He was married to the daughter of Charles IV King of Bohemia, Anne of Bohemia in 1382, they had a happy marriage although no children. Sadly she died of the Plague in 1394, Richard was said to have been inconsolable and deeply mourned his wife, he arranged his own funeral in order that he would be laid to rest by her side in Westminster Abbey. However, he later agreed to marry, and to secure peace with France, he married The French princess Isabella Of Valois in 1396.

His persistence to lavish favour to a select few angered and brewed discontent amongst some, and a collection of Lords, known as Lords Appellant took control over Government and had sentenced many of his favourites to death. When Richard travelled to Ireland in 1399, Henry Bolingbroke returned to claim his fathers estate, that had been seized and distributed by Richard, with a growing following and increased support, he captured Richard on his return and deposed him, Richard had no option. Henry was crowned and ruled as King Henry VI, Richard had been abducted, and imprisoned in the Tower Of London, before being removed to Pontefract Castle in Yorkshire, where his days were ended shortly afterwards in February 1400, aged 33 years, he had reigned for 22 years. Henry Bolingbroke ignored Richard's funeral plans that had carefully been made, and instead had him buried at Kings Langley, a Dominican Priory, he was later buried in Westminster Abbey by Henry VI's son Edward IV, and was perhaps immortalised by the writings of William Shakespeare in his play Richard II.

Contributors: Do you have a site related to Richard II?
Supply some content for this page and we will gladly add a link to your site. Email here.