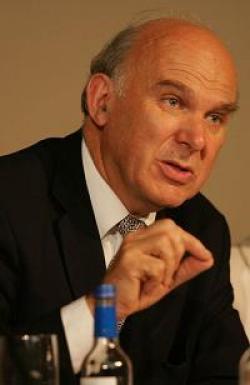 In a House of Commons crowded with Old Etonians insulated by wealth from the commonality, and those with little experience beyond university, political research, and acting as lobby-fodder MPs, Vince Cable stands out. He is a heavyweight economist; has worked in the public and private sectors at a high level both in Britain and internationally; and has a deadly turn of phrase of his own making (in contrast to many of his contemporaries in Parliament).
John Vincent Cable was born in York on May 9 1943, attending Nunthorpe Grammar before going up to Fitzwilliam College Cambridge to read Natural Science and Economics, being elected President of Cambridge Union in 1965. After a PhD at Glasgow University his career made use of his academic skills in roles with the Kenyan Government, as special advisor to then Industry Secretary John Smith, as a lecturer at the LSE and Glasgow; and from 1990 to 1997 with Shell where he was chief economist from 1995.
At university he joined the Liberals, but moved leftwards for a time, becoming a Labour Councillor and standing for Parliament for the same party. In 1981, however, he joined the newly formed Social Democrats. Vince Cable finally won a seat in Parliament in the 1997 general election, taking Twickenham from the Tories. He has been Liberal Democrat Treasury Spokesman since 2003, though he only truly came to public prominence when Menzies Campbell resigned as leader in October 2007, stepping into the breach brilliantly as acting leader until the election that saw Nick Clegg become party leader.
Cable has received added kudos for questioning at the time the economic situation that would eventually lead to the credit crunch and recession; and his stinging jibe about Gordon Browns transformation from Stalin to Mr Bean hit home better than anything Brown had faced since 1997. His critique of the handling of the Northern Rock crisis by the government and the startled inactivity of the opposition earned him more admirers of independent mind.
He has published widely on economic subjects, but has also found time to become a proficient ballroom dancer, and to enjoy his other hobbies of cycling and horse-riding.

Contributors: Do you have a site related to Vince Cable?
Supply some content for this page and we will gladly add a link to your site. Email here.