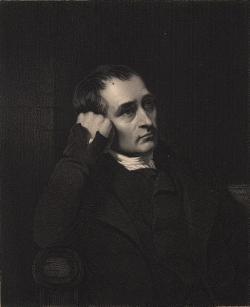 Rarely can a figure who effected such an enormous change in industry, with massive benefits for the economy of the country, have been so personally unsuccessful as Samuel Crompton, inventor of the Spinning Mule.
Born on a small farm in Bolton on December 3 1753, Crompton was forced into work as a spinner along with his mother when his father died young. Exasperated by the slowness of his work determined by the low breaking strength of the yarn Crompton at the tender age of just 15 began work on a machine to improve it. From an early age he had been adept with his hands, even making his own violin that he played to earn extra money at Bolton's theatre.
In an age of machine breaking, and to protect his ideas, he worked in secrecy, and in 1779 he produced the first hand-powered version of his Spinning Mule, so called because it was a cross between Arkwrights Water Frame and Hargreaves Spinning Jenny. Lacking the finances to patent his device he kept it from the public gaze, though the quality of his yarn meant competitors were aware he had developed something different, his product being suitable for fine muslins.
Eventually he sold the rights to the machine for a pittance, given vague promises of revenue to come that of course never did. He worked as a farmer, continuing to spin with his own machinery, and for a time ran a disastrous dyeing business in Darwen, the debts of which swallowed much of the £5000 granted him by Parliament in 1812.
Crompton, whose invention made Lancashires cotton industry the world leader, died almost penniless in Bolton on June 26 1827, having survived on a small annuity paid for by friends.

Contributors: Do you have a site related to Samuel Crompton?
Supply some content for this page and we will gladly add a link to your site. Email here.