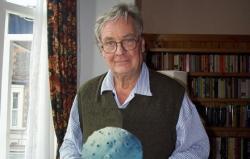 The words: But Emily loved him will still bring a tear to the eye of those who grew up enjoying Oliver Postgates magical television programmes for children.
The future creator of Bagpuss et al was born in Hendon on April 12 1925 into a prodigiously talented family  his father Raymond was a journalist, historian, novelist and noted gourmet, one grandfather was a professor of classics, the other briefly leader of the Labour Party, and his cousin was Angela Lansbury the actress.
During WWII he was a conscientious objector, serving with the Red Cross in Germany when hostilities ceased. For some time afterwards he struggled to find his niche, training and working as an actor, dabbling in mechanical inventions, then in 1957 beginning work with a TV production company. He convinced them he could do better  and significantly cheaper  work than their then output for children, and the rest is blissful TV history.
Postgate recruited artist and lecturer Peter Firmin  according to the latter because he was cheap  and they soon established Smallfilms, their own production company largely working in the cowshed at Firmins house near Canterbury. Using simple stop-frame animation, Firmin providing the elegantly simple backgrounds and characters, Postgate the scripts and voices as well as the photography, they produced a catalogue of utterly charming series including Ivor the Engine; Noggin the Nog; Pogles Wood; Bagpuss; and the fascinating Clangers (with characters knitted by Firmins wife).
Coming from a socially active family (his childhood contacts included H.G. Wells and Bertrand Russell, the latter the model for Professor Yaffle in Bagpuss) Postgate remained interested in politics all his life, supporting CND and even embracing new technology and blogging for The New Statesman. He died in Broadstairs on December 8 2008, but Bagpuss, once voted best childrens TV programme of all time, will live forever.

Contributors: Do you have a site related to Oliver Postgate?
Supply some content for this page and we will gladly add a link to your site. Email here.