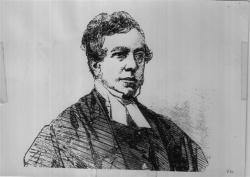 William Webb Ellis is now, in the sporting world at least, remembered for doing something that may or may not have happened: he is the pupil at Rugby School credited with picking up the ball and running with it during an 1823 game of football, contrary to the rules of the day (though there is even debate about that), which as if by miraculous revelation led to the creation of the new game of Rugby. The tale came via Matthew Bloxam, a fellow Rugbeian of later date who supposedly had heard it from another. Whatever the truth, it is Webb Elliss name that was chosen for the Rugby World Cup trophy first played for in 1987.
Webb Ellis was born in Salford but in his early childhood was taken by his widowed mother to live in Rugby in Warwickshire, thus qualifying for free education at Rugby School  his father, a Dragoon Guards officer, had died in 1811 in the Peninsula campaign. William proved a capable scholar, winning a place at Brasenose College Oxford in 1826. He was immortalised there for a literary reason as a winner of the annual Brasenose Ale verse competition, but retained his sporting pedigree by playing cricket in the Varsity match.
After Oxford he became a noted Low Church clergyman, but never progressed above the level of rector (though he held that post at fashionable St Clement Danes in the Strand for a time). He died a bachelor in southern France 1872, his grave in Menton rediscovered with some fanfare by Ross McWhirter in 1958.

Contributors: Do you have a site related to William Webb Ellis?
Supply some content for this page and we will gladly add a link to your site. Email here.