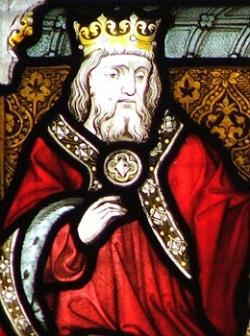 Edward (The Elder) was born in 870 in Wessex, he was the eldest surviving son of King Alfred The Great, and Queen Elswith. He had fought side by side with his father at several campaigns against the Vikings, which afforded him a good grounding in military expertise. When Alfred the Great died in 899, a rebellion ensued, as preference was shown to Edward, this resulted in Edward's cousin Aethelwold, who was the son of Alfred's brother starting a revolt to strengthen his claim, he seized control of Wimborne, and Christchurch, Edward confronted him and tried to entice him into battle, however Aethelwold left to join the Vikings in Northumbria where he received their support and was proclaimed their King.

Edward ascended to the throne in 899, although his Coronation did not take place until the 8th June 900, at Kingston-Upon-Thames. Aethelwold resurfaced, he took his fleet to Essex and encouraged the Danes to rise up against Edward. Inevitably Edward and Aethelwold met at the Battle of Holme, a bloody battle ensued and resulted in the killing of Aethelwold, and King Eohric of the East Anglian Danes, although the Danes were the victors on this occasion. Edward again fought at the Battle of Tettenhall in Staffordshire when the invading Northumbrian Danes attacked Mercia, they were met by the joint forces of the West Saxons and Mercian's where he won Victory against the Danes.

The battles and challenges that Edward faced continued, with trouble in Northumbria, his success spread and he took a wider control in Mercia, Essex, and East Anglia, he was even recognised as Overlord by the Welsh, The Norse, and The Scots. Even in death his bravery shone through, when he was leading an army against a rebellion where he died in 924, he had married three times and had fathered no less than fourteen legitimate children. He was succeeded on his death by his eldest son Athelstan, whom Edward had named as his successor, Edward was buried in Winchester.

Contributors: Do you have a site related to Edward The Elder?
Supply some content for this page and we will gladly add a link to your site. Email here.