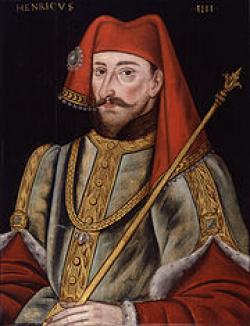 Henry IV was born at Bolingbroke Castle in Lincolnshire on 7th April 1366, he was to be the first monarch to reign in the House of Lancaster. His father was John of Gaunt, the son of Edward III, and his mother was Blanche of Lancaster. In 1377 his cousin Richard became King and ruled as Richard II, Henry disagreed with many decisions made by Richard, and in 1387 he joined a group of Nobles that opposed Richard known as the Appellants, Henry captained the army of troops that fought the bloody Battle of Radcott, in Oxfordshire, this resulted in Henry being banished by Richard for life. Henry married Mary De Bohun in 1380, and they had two daughters and four sons, the eldest son was destined to reign as Henry V, his brothers were John, Duke of Bedford, Thomas, Duke of Clarence, and Humphrey, Duke Of Gloucester.

when Henry's father died Richard saw his opportunity to seize his lands, and wealth, thereby denying Henry of his inheritance. Henry decided to rebel, and invaded England with troops supplied by the King Of France, whilst Richard was in Ireland, Richard ultimately surrendered, Henry declaring that Richard had abdicated in 1399, Richard was found dead, presumed murdered in 1400 at Pontefract Castle, Henry ascended to the throne, and his Coronation took place at Westminster Abbey on 13th October 1399.

Henry had to struggle to hold on to the control of his kingdom, with a battle, where he led his troops against a rebel army at the Battle of Shrewsbury in Shropshire in 1403, when the Percy's of Northumberland turned their back and joined the Welsh, this came about because Henry had reneged on his promise of wealth, and royal favours after the Percy's had previously rallied, and supported Henry against struggles with the Welsh and the Scots, which they gave. Henry was riddled with illness and suffered poor health towards the end of his reign, whereby his son Prince Hal took over many of the royal duties. Henry eventually died on the 20th March in 1413, aged just 46, in Westminster Abbey, he was later buried at Canterbury Cathedral in Kent. His son ascended to the throne, and ruled as Henry V.

Contributors: Do you have a site related to Henry IV?
Supply some content for this page and we will gladly add a link to your site. Email here.