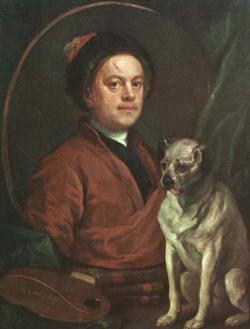 William Hogarth was born 10th November 1697 and died 25th October 1764. He was a major English painter, printmaker, pictorial satirist, social critic and editorial cartoonist who is most famous for his modern morality pictures. Much of his work poked fun at 18th century politics and customs and his satirical engravings are considered an important antecedent of the comic strip. He was born in London, the son of a poor school teacher who ended up in debtor's prison. He was apprenticed in 1713 to the engraver, Ellis Gamble, where he learned to engrave trade cards and similar products. He took an interest in London street life and amused himself by sketching the characters he saw. He first worked as an engraver, producing coats of arms, shop bills and designing plates for booksellers. In 1729 he married Jane Thornhill, daughter of artist Sir James Thornhill, who taught him to paint. His early satirical works included, 'South Sea Bubble', about the disastrous stock market crash of 1720 in which many English people lost a great deal of money. In 1731 he completed the earliest of his series of 'modern moral subjects' which first gave him recognition. This was 'A Harlot's Progress'. The 6 scenes trace the miserable fate of a country girl who began a prostitution career in town. The series was an immediate success and was followed in 1735 by the sequel, 'A Rake's Progress'. This is a series of 8 pictures showing the reckless life of Tom Rakewell, the son of a rich merchant who wastes all his money on luxurious living, whoring, and gambling, ultimately ending up in Bedlam. So popular were the engravings that they were soon pirated, with Hogarth's subsequent campaign against this pirating led to the Copyright Act of 1735. From 1735 to 1755 he ran his own academy in St. Martin's Lane, London, generally thought of as the forerunner of the Royal Academy. In 1743-45, Hogarth painted the 6 pictures of 'Marriage a-la-Mode', a pointed strike at upper class 18th century society, showing the miserable tragedy of an ill-considered marriage for money. This is regarded by many as his finest project. All the paintings were engraved and the series achieved wide circulation in print form. Later important prints include his pictorial warnings of the consequences of alcoholism in 'Beer Street and Gin Lane' (1751). Hogarth engraved 'Beer Street' to show the merits of drinking the 'good' beverage of beer, over and above 'Gin Lane' which showed the effects of drinking the harder liquor of gin. The prints were published in support of what would become the Gin Act of 1751. Hogarth also produced a series of prints in 1751 called 'The Four Stages of Cruelty' in which he set out to show some of the terrible habits of criminals and how they ultimately lead to execution. Hogarth was also a popular portrait painter, and in 1746 he painted actor David Garrick as Richard III, for an all-time record sum of £200. Other masterpieces included The Shrimp Girl, and a full-length portrait of philanthropist, Captain Coram. 'The Gates of Calais' were produced in 1748, following a visit to France where he was accused of being a spy for sketching the fortifications at Calais. He represented the French as cringing, emaciated and superstitious people. Hogarth was a maverick of his time, combining sequential painting and engraving modern moral subjects by treating them as a dramatic writer would. He remarked that, "his picture was his stage." In 1753 he wrote and published his ideas of artistic design in his book, 'The Analysis of Beauty'. Between 1749 and until his death in 1764, Hogarth lived in Hogarth House in Chiswick, which is now open to the public as a museum. Hogarth is buried in the graveyard of the nearby St. Nicholas' Church.

Contributors: Do you have a site related to William Hogarth?
Supply some content for this page and we will gladly add a link to your site. Email here.