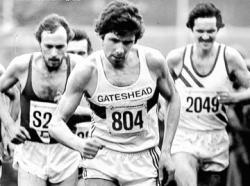 Competed in three Olympic Games, winning a bronze medal in the 10,000 metres at the 1976 Montreal Olympics. Held world records for 2 miles and 3,000 metres. Won the European Championships 5,000m in 1974. Awarded the BBC's Sports Personality of the Year award in 1974. Won gold medal for
10,000 metres at the 1978 Commonwealth Games in Edmonton. Awarded an MBE in 1976. Founded the Great North Run in 1981. Since retirement has become a television commentator.

Contributors: Do you have a site related to Brendan Foster?
Supply some content for this page and we will gladly add a link to your site. Email here.