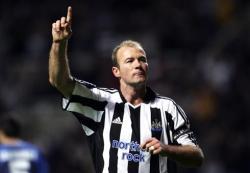 Alan Shearer is a former English professional footballer who was known as a player for his 'classic English centre forward' style. He was a firm favourite with England fans and enjoyed a long international career spanning 63 caps, with 34 as captain. Part of his popularity may stem from the fact that, at a time when many footballers were acting like pop stars, Shearer kept his personal life out of the press and carved a positive image as a family man.

Shearer will always be remembered for his goal scoring ability, although for the first part of his career he was more of a goal provider. He spent four years at Southampton between 1988 and 1992, in which time he was more likely to be seen setting up goals for Rod Wallace and Matt Le Tissier. He was called up to the England squad towards the end of his time at Southampton and, despite the attentions of Manchester United, was tempted away by big spending Blackburn Rovers instead. It was during this time that he developed into a prolific goalscorer, with 112 goals in 138 appearances in four years at Blackburn Rovers.

Goals began to dry up for Shearer in 1996, but he had a very good Euro 96 campaign for
England, winning the Golden Boot title with five goals. He was transferred to a Newcastle United side managed by Kevin Keegan for a world record £15 million. In ten years at St James Park, Alan Shearer became a legend to the Toon Army. He was a little less prolific in his scoring that he had been at Blackburn but still netted 148 times in 303 appearances.
In his career he only managed one major title, the Premier League title with Blackburn Rovers in 1995. He is, however, the record goalscorer in Premier League history with 260 goals. Since retiring as a player in 2006, Shearer has dedicated much time to charity work and appears on BBC Television as a sports pundit

Contributors: Do you have a site related to Alan Shearer?
Supply some content for this page and we will gladly add a link to your site. Email here.