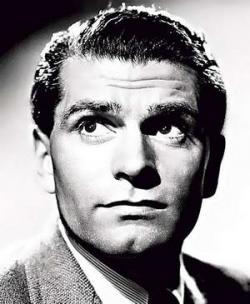 Laurence Kerr Olivier was born 22nd May 1907 and died 11 July 1989. He was one of the most famous and revered British actors of the 20th century and played a wide variety of award-winning roles on stage and screen. He was also a director and producer and was the first Artistic Director of the National Theatre. Its main stage is named in his honour. Olivier was born in Dorking, Surrey, the youngest of three children, into a strict and religious household ruled over by his father, a clergyman. In 1918 the family moved when his father became the new church minister at St. Mary's Church, Letchworth. He was educated at St Edward's School, Oxford, and it was his father who decided that Laurence, or Kim as his family knew him, would become an actor. Olivier then attended the Central School of Dramatic Art at the age of 17. In 1926 he joined The Birmingham Repertory Company where he played a variety of roles including Hamlet and Macbeth. Olivier married actress Jill Esmond in July 1930 and had one son, Tarquin, born in 1936. The marriage lasted for 10 years, during which time Olivier renounced religion forever and began an affair with actress Vivien Leigh after they appeared together in the film 'Fire Over England' in 1937. The couple travelled together to America, Olivier to film 'Wuthering Heights' and Vivien Leigh in pursuit of the role of Scarlett O'Hara in 'Gone With the Wind'. Both films were a hit and the couple suddenly found themselves to be major celebrities throughout the world. They eventually married in August 1940. They returned to England during World War II and in 1944 Vivien Leigh fell ill, firstly with TB and then episodes of manic-depression that would plague her life and their relationship. In 1947 Olivier and Leigh embarked on a tour of Australia and New Zealand to raise funds for the Old Vic theatre. The tour was a success although Olivier later commented that he "lost Vivien in Australia." The couple continued to perform together on both the stage and screen many times over the subsequent years until their divorce in 1960. Olivier then married actress Joan Plowright in 1961, with whom he went on to have three children with. Olivier created several Shakespearean films, based on stage productions he had appeared in. In the late 1950s John Osbourne wrote a play for Olivier entitled 'The Entertainer', where he was to meet his future wife, Joan Plowright. During his directorship of the National Theatre, Olivier appeared in twelve plays there and directed nine. He was replaced at the National Theatre by Peter Hall in 1973. Olivier threw himself into his work, reportedly as a way of distracting himself from the guilt he felt at leaving Vivien Leigh. He began appearing more frequently in films such as 'Sleuth', 'Marathon Man' and 'The Boys From Brazil'. In 1974 he served as "the voice of God" on a 26-part documentary series, 'The World at War', and his last decade also contained three great award-winning roles for TV in 'Brideshead Revisited', 'A Voyage Round My Father' and 'King Lear' for Granada TV. In 1988 he gave his final performance, age 81, in Derek Jarman's film 'War Requiem'. He died at his home in Steyning, West Sussex and his ashes were interred in Poets' Corner at Westminster Abbey.

Contributors: Do you have a site related to Laurence Olivier?
Supply some content for this page and we will gladly add a link to your site. Email here.