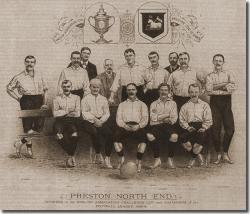 The other teams in the first ever league race must have worried a bit about Preston North End as the season began. After all, the previous season had seen PNE win one cup game  against Hyde United  26  0. And they had an unbeaten run of 42 friendly and cup games in that season. But surely in the new competition things would be tougher? Not really, it seems.
In the 1888  89 Football League Preston went unbeaten  as they did in the FA Cup , thus becoming the first winners of the fabled Double. They were and are truly The Invincibles. Admittedly there were then only 22 games in the league season, but if their credentials are doubted, add another factoid to the mix: they didnt even concede a goal in their cup run. And throw in an imagined one  they are unlikely to have practiced stupid goal celebrations.
By January 4 only Aston Villa could catch them, but that day Villa lost and Preston won, settling the title long before the season ended. Which allowed some of the team to focus a bit on their other occupations  forward Fred Dewhurst was a schoolteacher; defender Robert Homes a railway worker: both played for England, Holmes eventually captaining his country. Neither of them is thought to have owned a Bentley convertible.