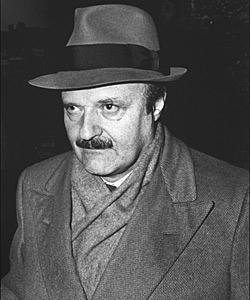 The president of Milans Banco Ambrosiano, with close-ties to the Vatican, Roberto Calvi had earned the nickname of Gods Banker. But common garden corruption, the likes of which has blighted Italian society for centuries, saw him murdered amidst the tangled wreckage of scandal.
In 1971 he took charge of Banco Ambrosiano. In 1982 he was found hanged underneath Blackfriars Bridge in London. Banco Ambrosiano was bankrupt, and Italy was reeling from another political scandal which undermined the Lira and hinted at the extent of the countrys problems in dealing with organised crime, fraud and corruption.
The Banco Ambrosiano scandal was unearthed after an investigation in 1978. Several billion Lira had been exported illegally. The Lira was struggling, and currency laws imposed tight restrictions on export. Just four years earlier, The Franklin Bank in Sicily went bankrupt, citing toxic debt and poorly judged currency transactions. History was repeating itself. Back then, the Franklin banks owner, Michele Sindona, was poisoned while in jail.
Calvi was tried for his part in the Banco Ambrosiano scandal. He was given a four-year suspended sentence and a charged with corruption and given a $19.8 million fine. Released on bail, Calvi fled the country. With a false passport in the name of Gian Roberto Calvini, he hired a private jet from Venice and head for London. Early on Friday morning, 18th June, 1982, he was found hanged in London. His pockets were full of bricks. He was carrying $15,000.
The first inquest returned a verdict of suicide. A second inquest was held and recorded an open verdict; the evidence was insufficient at the time to suggest murder.
The truth behind Calvis death and the banks collapse is buried beneath intrigue, lost in the shadows of organised crime and secret societies. A mason, with ties to senior Vatican officials, Calvi operated in the twilight. In 1997, Italian prosecutors opened investigations into Giuseppe Calò and Licio Gelli. The former, a Sicilian Mafioso; the latter, grand master of the P2 masonic lodge. In 2005, Gelli, Calò and four others were formally implicated in the murder  Flavio Carboni, Manuela Kleinszig, Ernesto Diotallevi, and Silvano Vittor. Gelli was not implicated when the trial was called on 5th October 2005. Carboni, Kleinszig, Diotallevi and Vittor were cleared of the murder.
Prosecutors and Calvis family maintain that he was murdered at the behest of the Mafia. Calvis son attests that his fathers murder was carried out by the Mafia, but only with the sponsorship of Italian politicians.