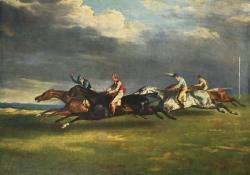 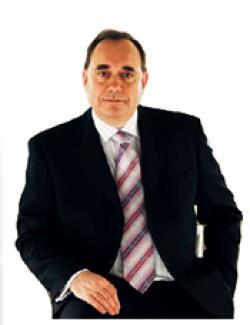 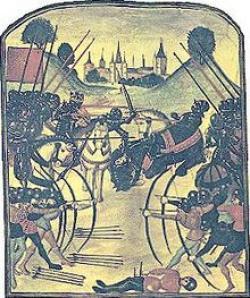 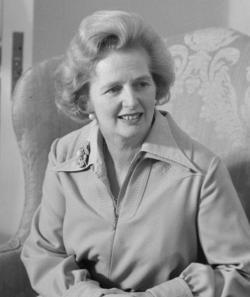 1st Running of the Derby

It was so nearly the Bunbury - the name for perhaps the world's most prestigious horse race was decided on the toss of a coin. Edward Smith-Stanley, the 12th Earl of Derby, had already established the Epsom Oaks in 1779, a race for top class three-year-old fillies. He and his friend Sir Charles Bunbury then agreed a similar race, for colts and fillies, should be organised. Rather egocentrically they thought that it should be named for one of the two of them. Derby won, so Derby it is.
The first Derby was run over a mile, partly to differentiate it from the Oaks. At least Bunbury had the pleasure of seeing his horse Diomed win the very first running, in May 1780.
The race is now run over a mile and a half, with a steep rise followed by a left hand turn and then into the straight past the stands, the horse swooping down the hill until the last few yards when the track flattens out and begins a slight rise.
Though the race is open to fillies as well as colts, the last filly to win was in 1916. And with horses from all over the world competing the chances of a horse winning the fabled Triple Crown - The 2000 Guineas , St Leger , and Derby - have reduced drastically. Some 15 horse have achieved that feat, but the last was the great Nijinsky in 1970. That doesn't stop the bookies taking bets every year that a new wonder horse will do it though. You rarely see a bookie riding a bike to work.
The Derby is run these days on the first Saturday in June, rather than in early May as originally, or a Wednesday in June as was quite recently the case. It is one of the great days of the British sporting calendar.