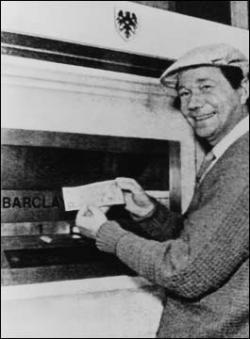 It was a eureka moment for John Shepherd-Barron, then managing director of De La Rue
Instruments: relaxing in his bath and annoyed about not being able to get at his own money over the weekend, the idea of an automatic cash dispensing machine came to him out of nowhere. If he could get chocolate from a machine, why not cash?

This was in an era when most banks still opened at 10am and closed at 3pm, or 3.30 if you were lucky. Saturday opening for banks was unheard of, and as cash was still king anyone planning a night out or two over the weekend needed to get their hands on some folding money before their branch closed on Friday.

Mr Shepherd-Barrons machine worked on a token system, with what amounted to single-use cheques impregnated with mildly radioactive carbon 14 put in the machine, and cash  the maximum being £10 - dispensed in return, once a PIN number had been entered. Four digits were decided on as, though Mr Shepherd-Barron could remember his old six digit army serial number, his wife thought she couldnt hope to recall more than four figures.

The first of his machines was opened in glamorous Enfield on June 27 1967, actor Reg Varney of the then popular (with some) TV series On the Buses being the inaugural customer.

A system had been tried briefly in the USA in 1939, leading American sources to claim they should be given the honour for inventing the machine, but as it was one machine that failed to persuade customers to use it, and was junked after six months, Mr Shepherd-Barrons claim-to-fame seems rather better.

There are now 1.5 million cash-dispensers worldwide. Mr Shepherd-Barrons old company De La Rue has fitted a good percentage of them, not a bad return for a bath-time idea. He was given the OBE for services to banking in 2005, a rather ungenerous reward for a man who changed the way the world works  and plays.