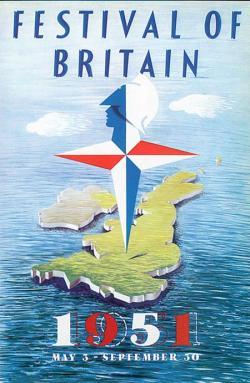 History on 3rd May 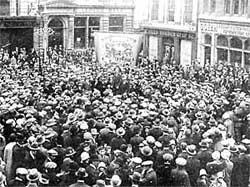 The Festival of Britain opens

Post-war Britain still suffering with rationing and austerity desperately needed a boost to morale, and in 1947 leading Labour Party figures Herbert Morrison and Gerald Barry promoted and planned The Festival of Britain, timed to begin in 1951 to mark the centenary of The Great Exhibition . The Festival was not just a London event, indeed the opening day, May 3 saw the lighting of 2,000 bonfires across the entire land to signal the reach of the celebrations, and there were major exhibitions in Glasgow , Oxford , Aldeburgh , Bath and many many more cities and villages around Britain.
But it was the events in London that were the focus of things. The Royal Festival Hall , a major modernist construction whose architecture embraced the future rather than the past, was the greatest symbol of the festival; Battersea Park was turned into a pleasure gardens; works by the likes of Barbara Hepworth and Henry Moore were highlighted in exhibitions that again welcomed the new. It was a time of great hope and great expectations.
The festival was opened by King George , who after attending a service at St Paul s made a speech to the nation from the Cathedral steps, declaring the event open. He then travelled to the Royal Festival Hall, where the Archbishop of Canterbury presided over another service, and then a less spiritual but undoubtedly explosive 41-gun salute at The Tower and Hyde Park marked the third element of the official opening.
In the five months of the event the main London site attracted two million more visitors than did the Millennium Dome in the 12 months of its use in 2000: the nation was perhaps more united in its desire to celebrate a new age, and it is tempting also to suggest that the daring of the Royal Festival Halls design and the energy and talent of the artists and sculptors who got behind the festival was far greater than was evident half a century later.