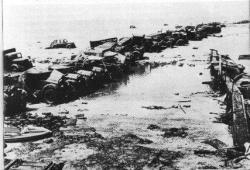 History on 27th May

The combined might of the French army, the British Expeditionary Force (BEF) and the Belgian army had failed to halt the German advance across France and the Low Countries. One German battle group raced through the Netherlands, another pushed through the defences in the Ardennes and swept across country in a curve that would bring them to the coast of Northern France. The majority of the BEF was compressed into a shrinking semi-circle of land around the port of Dunkirk, all hopes of defending France at an end.

The BEF was vital to the continuation of the war, and in the short term for the defence of Britain itself. These were the trained professional soldiers who would be best able to resist the expected invasion following the rout in France. They also had the best of the British materiel, including armour and artillery.

What had been a 30km perimeter around Dunkirk shrank as the days went on, and the withdrawal could be effected, until eventually only a strip of land 5km deep was defended.

Admiral Ramsay just a few miles away in Dover hurriedly prepared and revised plans for the evacuation from Dunkirk. The navy secured the English Channel  the German Navy, or at least the German surface ships made no incursions to hit the stranded forces from the sea, and to catch the evacuation vessels in transit. This was left to the Luftwaffe, whose Stukas dive bombed the beaches ceaselessly.

Why the German Panzers were held back at the outset of the evacuation is not known. They had brushed aside the allied armour as they sped through the French and Belgian countryside, technically superior vehicles with greater firepower than the allies could muster, the Panzers were a formidable weapon. Some think that the blitzkrieg had almost exhausted fuel and other supplies. Others that Hitler wanted to save them for completing the occupation of France. A third theory is that Hitler was saving his strength in the belief that having been swatted aside so easily, Britain would sue for peace, and that a slaughter of the BEF would make it impossible for British honour to accept peace.

The initial evacuation was through the port of Dunkirk, using ferries to take the troops to England or to larger naval vessels offshore. Passenger ferries from as far away as Glasgow were commandeered for the effort. It was not until May 31 that things had become so desperate that the famous little ships were seen in action.

Troops from five allied countries were rescued from Dunkirk in what was code-named, with a certain irony, Operation Dynamo: Britain, Belgium, France, Poland, and even a few soldiers from the Netherlands. Their evacuation was covered by the 51st (Highland) Division, fighting against overwhelming odds. There were many tales of heroic resistance in this rearguard action, as well as some of cowardly officers abandoning their men to seek evacuation for themselves.

On May 27 almost 8,000 men were taken from Dunkirk to safety in Britain, the first of what would eventually be more than a third of a million fighting men rescued to fight another day.

From Dan Wybo on 27th April 2011
Daniel Wybo London Ont Canada - Lord Keyes, 2nd Baron and son of Admiral of the Fleet SIR ROGER KEYES having inherited his father's diaries and papers, Keyes made it his mission to carry on his father's work of nailing what he saw as the "great lie", by which Leopold had been made the scapegoat for the defeat of France and the British Army in 1940. In Outrageous Fortune the villains of the piece were the French Prime Minister Paul Reynaud and Churchill. The former had vilified the Belgian King in a venomous broadcast. Churchill, while urging Leopold not to deliver himself to the Germans and divide Belgium (whose Government fled first to France and then to exile in Britain), praised the Belgian Army's courage and described its surrender to Parliament in much milder terms. (He had earlier admitted to the BEF's commander, Lord Gort: "We are asking them to sacrifice themselves for us.") Indeed, it was only after the French Government had vigorously complained about his public generosity to the Belgians that Churchill felt obliged to tell the House that the King had surrendered his army without warning his allies. Keyes pointed out that even this was unfair, since it had become clear by that time that Belgian resistance could not be further prolonged, and the British had, anyway, begun their escape through Dunkirk without telling their Belgian allies. In a volume of biography, Outrageous Fortune, published in 1984, the 2nd Lord Keyes set out to exonerate Leopold, whom he regarded as having been traduced by France and Britain for having ordered the Belgian Army to lay down its arms on May 28, 1940, after it had courageously fought the Wehrmacht for 18 days.

From Truth Seeker on 22nd April 2011
Winston Churchill really was a despicable human being. A liar, a pompous, arrogant one at that. How he lied about King Leopold of the Belgians was beyond sickening. Lying to Parliament and to your King, Winston? Shameful coward. He admitted to his own son that he lied and scapegoated an innocent man, but he didn't have the morality or courage to make amends for the damage he caused. That is NOT the sign of an homourable man.