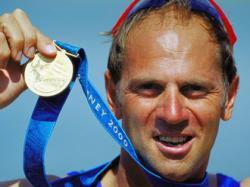 At the end of the 2,000m course things were getting mighty close. The Australians, with twins Geoff and James Stewart in their four banking on local knowledge had kept in touch from the start. The Italians came at the end with a lung-busting charge that took them to what looked like an inch of winning. But the winners of the coxless four gold at the Sydney Olympics by the fine margin of 0.38 seconds were the British crew: newcomers to Olympic glory James Cracknell and Tim Foster; Matthew Pinsent winning his third gold; and the magnificent Steve Redgrave grabbing gold for the fifth Olympiad in a row, if youll forgive the pun.
Redgrave first took Gold in the 1984 Los Angeles Games, in the coxed four. Four years later he had changed disciplines, winning in Seoul in the coxless pair as he would again in Barcelona in 1992 and Atlanta in 1996, the last two events with Matthew Pinsent.
Steve Redgrave and Matthew Pinsent became almost mythical figures in the world of rowing. If they failed to win any event they entered it was big news. But failures were very few and far between, and not in the big events.
At the end of the final in Atlanta Redgrave, whose life had been dominated by the sport, announced his retirement, memorably inviting anyone who saw him near a boat to shoot him. Four years later, having had his appendix removed and been diagnosed with diabetes, he was winning gold again.
More than six million British TV viewers watched the race, which took place after midnight in the UK. The crowd in Sydney was predominantly British, including Redgraves wife and three children. Those of us listening to Alan Greens commentary on Radio 5 will not forget it in a hurry either, at the finish ordering listeners to stop whatever they were doing to stand and salute the greatest rower and the greatest Olympian of all time. And for once such words were not hyperbole.