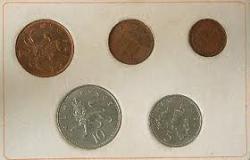 Even at the time nobody argued that decimalisation of the British and Irish currencies had been sprung on the public. As far back as 1824 Lord Wrottesley had proposed that Sterling be decimalised. The Decimal Association had lobbied for it since its foundation in 1841. A Royal Commission in 1920 suggested a system of 1,000 mills to the pound.

Reason had long concluded that the old system of 12 pennies to a shilling, and twenty shillings to a pound, rooted in Saxon times, was an irritant to trading partners and tourists, and an anachronism. But like so many anachronisms in Britain it took some shifting.

In 1963 the Halsbury Committee suggested the changes which were given the force of law in the 1967 Decimal Currency Act. But the actual change did not happen for nearly four more years. The currency of Eire changed with Sterling, as the two were linked with the Pound and the Punt at parity.

The preparations for the big day, called D-Day by many, were over dramatic and succeeded in frightening many elderly people, and confusing others by running two coinages in parallel. The florin (2s) was replaced by the 10p in 1968, as was the shilling piece by the new 5p coin. In 1969 the ten shilling note was withdrawn, replaced by the 50p piece. Entertainers were drafted to publicise the change  Max Bygraves singing Decimalisation (why add to the misery some asked), and the Scaffold providing tunes for public information broadcasts.

At 3.30pm on Wednesday February 10th (February chosen as the quietest time of the year commercially) the banks closed, only reopening at 10am on Monday February 15th, by that time fully stocked with the new coinage.

Perhaps predictably the idea of running the two systems in parallel for several months was quickly abandoned by most shops  some prices in old money had no exact equivalent in new pee, leading to arguments. It was awkward trying to work tills in two systems. And just as happened elsewhere later with the Euro shopkeepers saw the opportunity for a bit of surreptitious rounding-up of prices, easier if the old variant was discarded, as it quickly was, with soon just a few older folk still asking Whats that in old money?