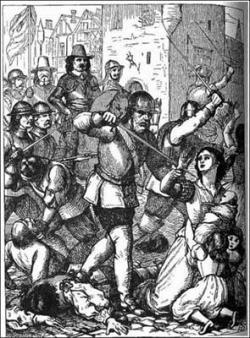 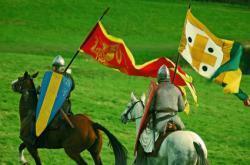 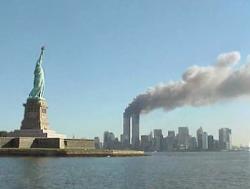 Attacks by Islamisists on New York and Washington

With the Civil War in England won, Charles beheaded and a Commonwealth Declared, Cromwell and Parliament in 1649 faced the threat of continued resistance in Royalist-held Ireland. Powerful forces under Cromwell proceeded to subdue the island in late summer.
Royalist leader in Ireland the Earl of Ormonde, having lost Dublin , decided on a strategy where garrisons within fortified strongholds would slow Cromwells advance, hoping Colonel Hunger and Major Sickness would take their toll of the invaders. Sir Arthur Aston and a force of roughly 2000 men held Drogheda against the future Lord Protector whose army, including an exceptional siege artillery contingent, assembled before the city walls by September 5.
Cromwell requested Astons surrender; when this was refused the red flag signalling no quarter was flown  Aston was aware of the consequences of his actions: Antonia Fraser in Cromwell Our Chief of Men argues persuasively the rules of war then were clear, resisting garrisons put to the sword as sieges cost so many besieger lives.
The Parliamentary artillery easily breeched the ancient walls, though fighting to penetrate beyond them was fierce. Once inside, however, Cromwells vastly superior numbers  perhaps 12,000 men  swiftly overwhelmed the defenders. A terrible massacre followed, including men apparently offered quarter if they downed their weapons. Monks and Catholic priests were hunted down and clubbed to death. People seeking refuge in a church were burned alive. Sir Arthur Aston was beaten to death with his own wooden leg. Though propaganda almost certainly exaggerated the civilian death-toll, many hundreds of non-combatants were slaughtered.
Cromwell ordered the defenders killed, though some were spared for deportation to Barbados effectively as slaves. His decision had several motivations: in 1641 Catholics had massacred Protestants in Ireland (but half the garrison was Protestant); such an example would prevent others in Ireland resisting similarly (it did); and he was disgusted that the Royalists wanted to continue the horrific Civil Wars.