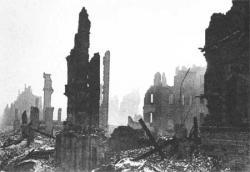 The British and American bombing of Dresden in February 1945 remains one of the most debated and perhaps debatable allied actions of WWII , though it has to be stated that historical evidence has yet to find any genocidal plot behind it. Deliberate strafing of civilians, however, which is a war-crime, has been repeatedly alleged.
Sir Arthur Harris , Marshal of the Royal Air Force heading Bomber Command, is the figure most often associated with the area bombing tactic at the end of the war; but Winston Churchill was keen to use the method for strategic reasons: to aid the Soviet advance from the east; and perhaps to demonstrate our airpower should Stalin later consider continuing his campaign.
Dresden was a logical target: not yet bombed it provided a centre for German administration; it was a focal point of arterial roads and railway lines; troops from the Western Front were moving through it to reinforce their comrades fighting the Soviets; and it was reported to house more than 100 factories and 50,000 workers producing war materiel. But the city was also famed for its baroque architecture and cultural heritage, and some have argued post-facto the attack made little difference to when the war ended.
Bombing began in the evening of February 13. By the following morning a firestorm had engulfed the city, razing it to the ground and killing more than 20,000 people (a number to which Goebbels added a zero for propaganda purposes). During the 14th more than 750 British and 300 American bombers dropped 2000 tons of high explosives and 1400 tons of incendiaries, the RAF concentrating on the city, the US planes on the railway yards. More raids followed the next day, in early March, and in mid-April.