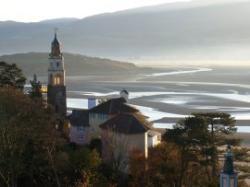 The Prisoner, like Fawlty Towers , has benefitted over the years from the decision to get out while the getting is good, in its case after just 17 episodes; sadly the makers of Only Fools and Horses and Last of the Summer Wine failed to learn the lesson.
Patrick McGoohan was the series creator, negotiated its commissioning with Lew Grade, played its central character, wrote several episodes, and directed more. His original inspiration came when an episode of the series which made him a star, Danger Man, was filmed at the strange Italianate Welsh resort of Portmeirion , which became the unforgettable setting for The Prisoner.
The premise and its development now seem very Sixties: an apparent spy resigns in disgust, is drugged and kidnapped, and then for the rest of the series is held in The Village where everyone has numbers rather than names  McGoohans character is assigned Number 6, which he greets with the famous line: I am not a number, I am a free man. His captors, led by various figures known as Number 2, seek information about why he resigned, and go to great lengths to trick, interrogate and retain him to that end.
Wonder of wonders, a TV programme that allows  requires - viewers to use their imaginations, and prompts consideration philosophical concepts. But it also had top gimmicks like the giant ball Rover; used a Lotus 7 in the title sequence; was fun; and not least attracted a fantastic cast list, featuring among others Nigel Stock, Donald Sinden , Anton Rogers, Leo McKern, Peter Bowles, Paul Eddington, and George Baker.